These seats are for giant packages only 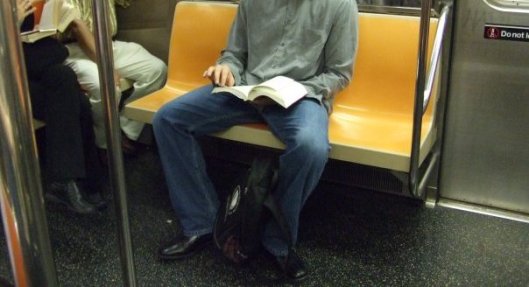 Their packages are so massive, so bountiful, that they’re physically incapable of keeping their legs together while seated. Every so often I’ll notice one of them move his legs closer together by an inch or so in an attempt to allow someone to sit next to them. But it seems that most of them are at the mercy of their enormous manhood and have no choice but to give their boys the space they need.

Just this morning a woman tried to sit next to one such gentleman, who made no effort to close his legs because it would cause him too much injury. She looked pissed, but I leaned over and explained to her that I’m sure he would make room if he could, but his physical condition prevents him from doing so. She nodded her head in sympathetic understanding and proceeded to squish herself into the remaining one third of the seat.

Where things get really ugly, though, is when two of these guys try to sit next to each other. Neither of them can spare an inch of room, so it turns into a contest to see who has the more fearsome junk. It’s fascinating to watch them jockey for the dominant position. Ever watch a nature documentary where they show two stags locked in battle, bashing each other in the antlers? It’s kind of like that. These guys duke it out knee vs knee, leg vs leg, all while maintaining the illusion that they’re paying no attention to each other whatsoever. Eventually the alpha dog emerges and the bitch retreats, crossing his legs in defeat. Imagine how painful that must be.

What we really need is designated seating for these poor guys, roomy enough for them and their family jewels.  How can we expect them to use seating that simply isn’t designed for them?  How is that fair?  Our society doesn’t take into account the needs of these men, and it’s not right.  What’s worse, we judge them unfairly.  Everyone automatically assumes that they’re selfish douchebags when really, they’re just differently abled. I was guilty of this stereotype as well; whenever I saw a guy crowding his seatmates by sitting with his knees three feet apart, I’d think, “Asshole.” But no more. Now I know better.

© 2012-2021 Fear No Weebles. Unauthorized use and/or duplication of this material without express and written permission from this blog’s authors and owner is strictly prohibited. Seriously. Don’t even think about it. I’m not kidding.