Spending an afternoon in April 1936

I really need to get that time machine up and running.

Because for starters, I need to go to the Automat. I’ve been hearing about this place since I was a kid. The last Automat in NYC was open until 1991 but by then it was a heartbreaking shadow of its former self. So even though I’ve been to that one, it doesn’t count as a true Automat experience. I want an authentic Automat experience like this: 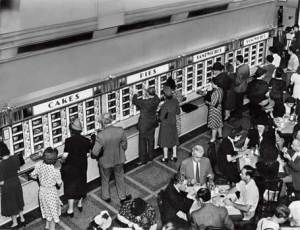 According to my parents, and everyone else I’ve ever spoken to who was lucky enough to eat there during its better days, the Automat was great. Everything was freshly prepared and all you had to do was put a nickel in the slot, open the door of the compartment containing the dish of your choice, and enjoy. It sounds like so much fun! Plus, they were reputed to have the best baked beans, the best rice pudding, the best macaroni & cheese, the best mashed potatoes, the best creamed spinach, the best chicken pot pie, the best honey buns, the best pies, the best cakes . . . the best everything, really. And most importantly, they had the best coffee, always freshly brewed. The coffee was dispensed from spouts shaped like dolphin heads—and let’s face it, anything dispensed from a spout shaped like a dolphin head is going to taste pretty fantastic.

So I need to go back in time so that I can have a delicious lunch at the Automat. I would have such a good time looking in all the little cubbyhole windows and choosing my meal. And I want to have a cup of that world-famous coffee poured from the dolphin spout, and maybe a piece of cheesecake or coconut custard pie (for which the Automat was also noted).

But it would be a shame to eat and run, so I would probably also take in a movie matinee. That’s why I’ve chosen April 1936—because that’s when Mr. Deeds Goes to Town, starring Gary Cooper, premiered. And if you haven’t seen what Gary Cooper looked like in those days, check it out:

See what I mean? Yeah, I know, he’s smoking in this photo, but Good Lord, he’s also smokin’. Talk about a hot dead guy. I’d have me a fine time watching him on the big screen, and besides, Mr. Deeds Goes to Town happens to be a fun little movie. Of course, they could have filmed him just sitting there reading aloud from the phone book and I’d pay money to see it.

On the other hand, maybe I’d skip the movie and get back in the time machine to hunt down Gary in person. That would make for a nice afternoon too.

Packing for a trip through time

I would love nothing more than to have a time machine so I could visit various places in different centuries, witness particular events, meet certain people, etc etc etc.

But how would you pack for such a trip? And what other preparations would be required? You’d have to prepare a lot in advance. And some destinations would require more planning than others.

For instance, if you wanted to visit Salem during the witch trials (although I’m not sure why you would want to), you’d obviously have to have clothing and equipment that were appropriate to the period. You’d have to make sure you had the right hairstyle, and you’d have to have a fluency in the English that was spoken during the 1690s. And of course you’d need a thorough understanding of the social and religions customs so you could blend in and not attract attention with any peculiar behavior. Because there’s one thing worse than being pegged as a tourist, and that’s being pegged as a witch.

In any case, here’s just some of what you would need to enjoy your trip safely.

Medicine for stomach aches and other gastrointestinal problems. Whether you’re having olives and wine in ancient Rome or enjoying a huge Victorian meal with 12 courses, you might have some digestive difficulties. Or you might find that the meat you ate was rotten or not completely cooked. And that can put a damper on any vacation.

Vaccinations against pretty much everything. No matter where you travel, you’re going to be in a cesspool of ick. Things like smallpox, yellow fever, measles, and typhus were everywhere. Sometimes you only worried about them during an epidemic, but in a lot of areas these diseases were endemic and posed a risk at any given time.

An arsenal of antibiotics. See “cesspool of ick” above. Plague, tuberculosis, typhoid, scarlet fever, cholera, and all kinds of other bacteria whirling around waiting to infect some unsuspecting time traveler.

(For the gentlemen) An era-appropriate condom or two. You’re on vacation, and you might meet some hot chicks that you’d like to get to know better. Maybe you always wanted to have your way with an 18th-century French courtesan. Or a Victorian trollop. Technically, you could leave all kinds of fair maidens with child without any repercussions. But condoms have been in use since the 16th century, so it would probably be a good idea to have one made that looks like the ones in use at your destination. Also, see above for “cesspool of ick.”

(For the ladies) Some sort of non-detectable birth control. Let’s say that image from “Pride and Prejudice” of Colin Firth in the wet shirt is etched on your retinas. If you were to visit England in 1810, you might find many gentlemen to your liking. In which case, you might want to get busy with some of them. But even if you’re visiting an age where condoms were in use, you can’t exactly whip one out from under your petticoats—women didn’t do that unless they were working girls. And you’d have a lot of explaining to do with a diaphragm or a sponge. Here’s where the Pill, an IUD, or hormonal injections come in handy, because they’re completely invisible. So you can have your way with your new friends, free of the risk of getting knocked up with a mixed-century child.

It would also be helpful to find some way of deadening your olfactory nerves during your trip. People and places were pretty ripe. The combo of body odor, human and animal waste, dead bodies, rotting food, and other unseemly aromas would probably be enough to make most of us keel over.

And you might want to leave your iPod, cell phone, and laptop at home.